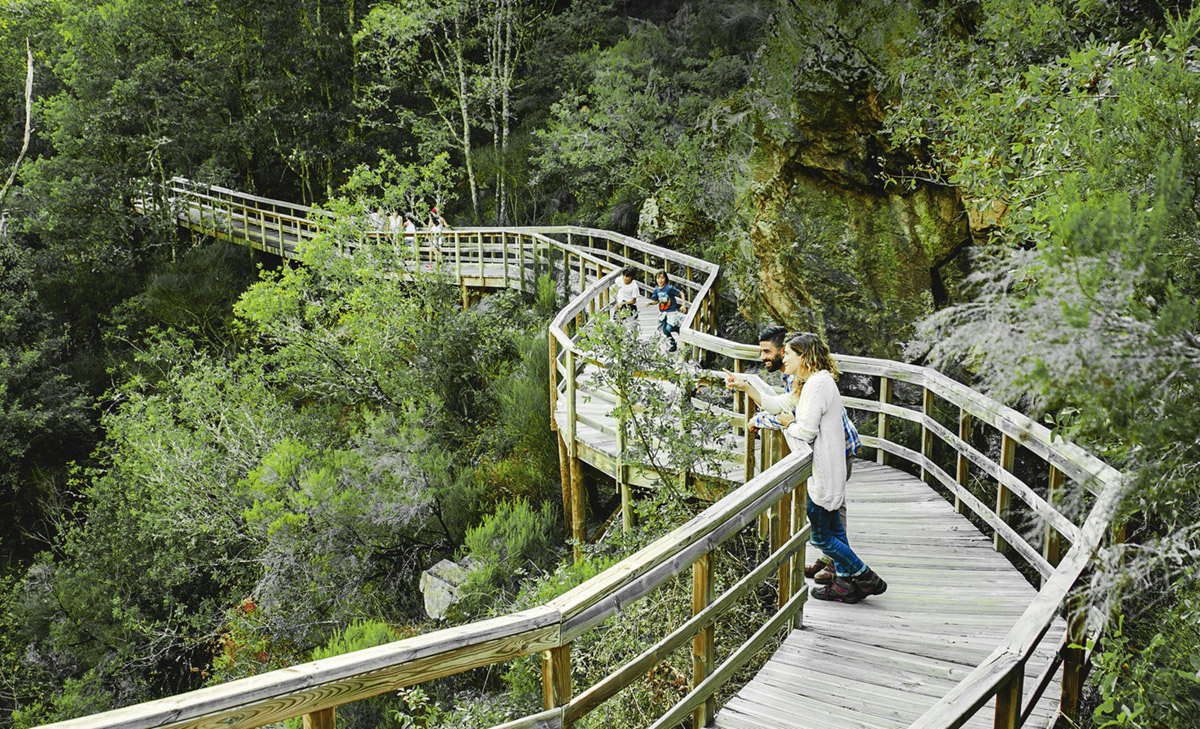 In the village of Parada de Sil, in the province of Ourense, there are many places to see that are probably unknown to most. This is a town with great attractions hidden between the slopes of the Mao River Valley. Next to the flow, you can find from a necropolis, an old power station, or a spectacular wooden walkway that leads hikers through an amazing nature.

Although in Galicia there are different places that allow disconnection, the truth is that the offer of hiking routes is one of our best letter of introduction. At this point, we are talking about a circular route that goes through the abrupt relief of the canyon excavated by the Mao River before flowing into the Sil.

The itinerary begins concretely in the Fábrica da Luz, an old hydroelectric power station that dates from 1914, today converted into a tourist hostel. Near this point, bordering the facilities, is the beginning of the footbridge that runs over the canyon. A path that meanders over the valley for a kilometre combining ramps, stairs, different informative signs and of course, a viewpoint for the enjoyment of the views.

Already without a footbridge and at the point where the Mao and the Sil merge, the route allows us to continue to the village of Barxacova. A small village with a lot of charm that even has a fluvial beach formed from the waters retained by the reservoir of San Estevo. Although the climate does not accompany the bathroom, it is worth visiting. However, the journey does not end here as you can continue to the Necropolis of San Vítor, near San Lourenzo de Barxacova.

This is a surface that houses an archaeological complex made up of the remains of a chapel and a necropolis with tombs excavated in stone. After the discovery and subsequent excavations at the site, more tombs were discovered and even, bone remains that could date from the tenth and eleventh centuries. Also found were coins from the time of Sancho IV, Henry II, Alfonso V of Portugal and even a Roman tegula. If there is no doubt about one thing, it is that the legacy that we encountered on the route is incredible.

Of course, if you prefer a more relaxed route, there are also shorter ones. For example, the Forcas – San Lourenzo of Barxacova, much shorter in length and also runs along paths with incredible views of the gorge. A tour suitable for young and old, which is probably the best option if you want to have a good time with your family.

The truth is that it doesn’t matter what route you take if what really interests you is to know the magic of this area, enjoy the scenery and of course, an environment full of peace and tranquility that can only offer you the sound of the water of the Mao River.