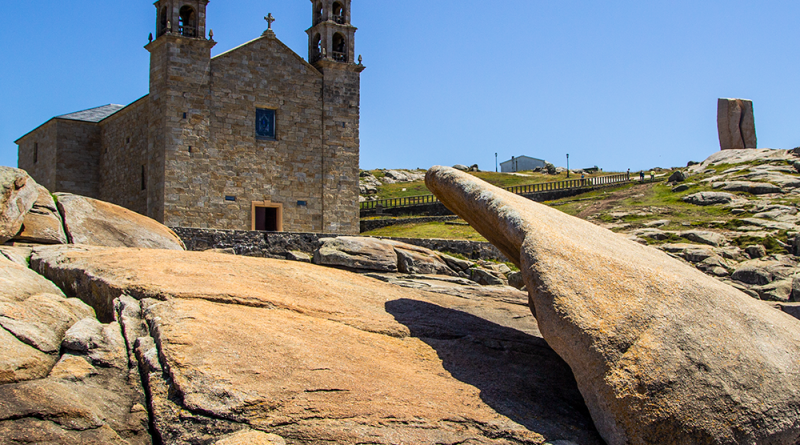 Tradition and legend, religion and magic, stone and sea … Several dualities coexist in Muxía, configuring the character of a town with a seafaring vocation and full of attractions to offer the visitor. Located in the heart of the Costa da Morte and on the peninsula that closes the southern side of the Ría de Camariñas, the origins of this town are lost in the past, but the echoes of those times have reached to the present day are felt strongly around the sanctuary of A Barca.

The most emblematic monument of the town has been both witness and protagonist of its history. Every year, in September, a massive pilgrimage that attracts thousands of people from all over Galicia is celebrated to pay tribute to the Virgin. The temple was rebuilt several times. The most recent, after the fire that suffered on Christmas Day 2013.

The place is also the destination of many pilgrims who, after arriving in Compostela and visiting the tomb of Santiago, decide to extend their route to Muxía to visit another of the spaces closely linked to the Jacobean tradition. The legend says, also explaining the name of the sanctuary, that was built in the place where the Virgin arrived in a stone boat to infuse encouragement to the Apostle.

That is why it is not surprising that the stones surrounding the temple are full of symbolism. The most famous is the Abalar, a huge granite mass of 70 tons that tradition identifies with the hull of the Virgin’s boat. Due to its shape and location, it makes a swinging movement when several people climb to its extremes. This unique feature has caused the astonishment of visitors for centuries, although in recent years it has only been able to swing intermittently because of a fracture. According to tradition, the stone was the scene of ancient rites related to fertility.

Other stones of the sanctuary with their own name are the Pedra do Temón, which would be the helm of the Virgin’s boat; the one of Os Namorados (the lovers) and the one of Os Cadrís, whose shape reminds us of a kidney and for that reason healing properties are attributed to it if the rite of going under it is fulfilled nine times.

In the vicinity of the sanctuary you can also see other stones full of symbolism, which form A Ferida. But in this case it was not nature that shaped them, but the hand of man. This is a large format work by the sculptor Alberto Bañuelos-Fournier as a tribute to the volunteers who fought against the black tide of the Prestige and as a remembrance of that catastrophe.

The Sala do Perello completes this petrous travel through the history and legends of Muxía. Not far from the sanctuary several large stones form a kind of room that would have had some odd inhabitant.