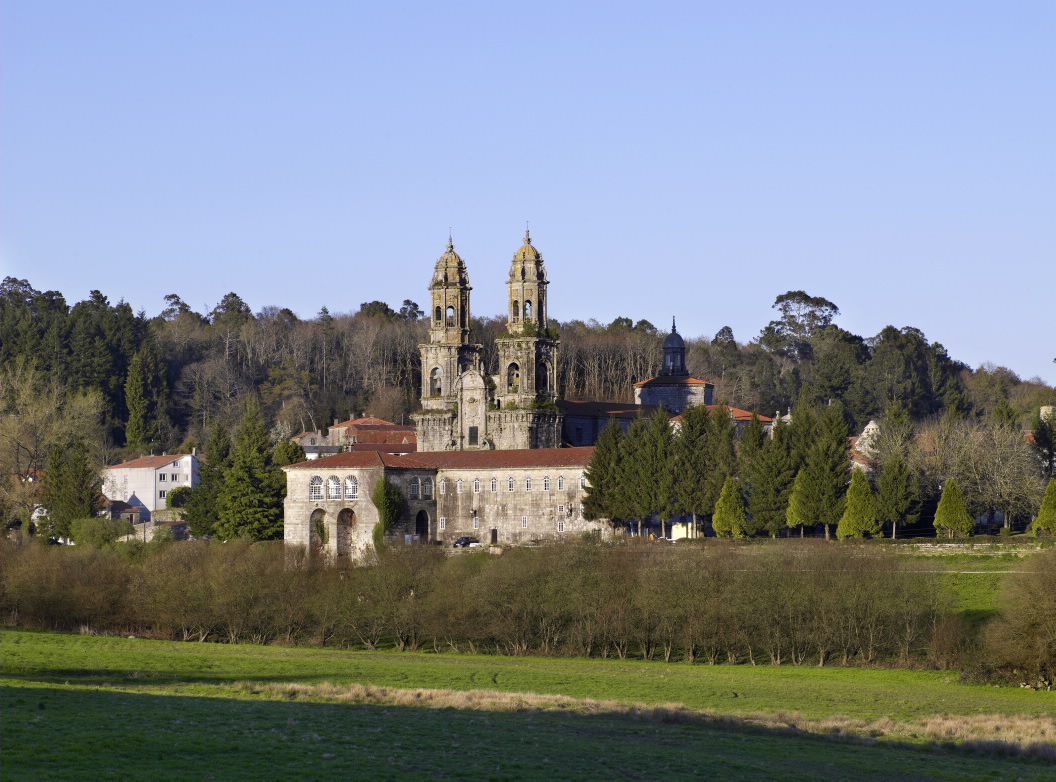 The Cistercian Monastery of Santa María de Sobrado, also known as Sobrado dos Monxes Monastery, is located in the Sobrado Council, in the southwest of the province of A Coruña, within the Terra de Melide region. It is considered a World Heritage Site as part of the Ways of Santiago of Compostela: the French Way and the Ways of Northern Spain since 2015.

The monastery was founded in the tenth century but it is not until the twelfth century, with the rise of the monasteries, when it is integrated into the order of Cister and lives its period of maximum splendor. It was later abandoned and did not recover until the15th and 16th centuries, when it became one of the richest and most powerful monasteries in Galicia and underwent major extensions and aprofound renovation of its facilities. This makes that the predominant style in the buildings is the baroque although we can still appreciate vestiges of the Romanesque in some parts of the church or of the chapter house.

At present, it is active as a monastery of the Cistercian Order of the Narrow Observance and you can visit the cloisters of the Pilgrims, which welcomes pilgrims on arrival, and the Processional Cloister or also called Las Caras, for the reliefs of the upper part and is where the Inn is located. During the visit you can also visit some places of great beauty and architectural interest such as the church, the chapterhouse or the old kitchen. The Cloister of the Community, the largest of the three, cannot be visited as it is reserved for the life and activity of the community of monks.

Another point of interest is the monastic church which is next to the main building of the monastery. With a Latin cross floor plan and Galician Baroque style, although some Renaissance lines, the dome over the transept and its impressive 17th century Baroque façade stand out. Also worth a visit are the chapel of the Rosary, the chapel of the Magdalene or the spectacular Renaissance sacristy.

The Monastery has a guesthouse and a small shop where you can buy your own products and those of other monasteries. But it is worth mention its role as Hostel for pilgrims who arrive by the Camino del Norte.

One kilometre from the Monastery is the Sobrado Lagoon which, with its 10 hectares of surface area, an almost round shape, and with a depth of between 1.5 and 4.5 metres, was built by the monks between 1500 and 1530 to supply the monastery’s kitchens with water, water its meadows or move its mill, bringing water from the next river Tambre. It also served as a trout hatchery to supply both the needs of the monastery and other nearby monasteries.

La Laguna belonged to the Cistercian Order until 1992, when it was ceded to the Galician Society of Natural History. Today it is protected by the Natura 2000 Network as it is one of the most important wetlands in Galicia.

Nowadays, Sobrado Lagoon can be visited and enjoyed in this place surrounded by meadows and a forest of birches, alders, ashes, oaks… and granite bowls hidden in the forest. It has recreation areas and several viewpoints for wildlife observation.