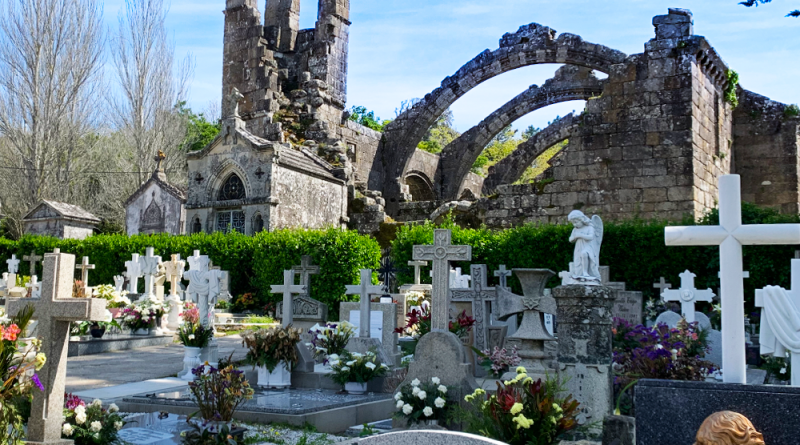 Galicia has always rendered a special cult of death. A ceremony that may have its maximum expression in Galician cemeteries.

Its meaning is “dormitory”, because that is how Christians saw the graveyards of antiquity.

If you want to know some of the most significant, today we show you its architectural and heritage wealth, but also its high ethnographic meaning that defines us as Galician people.

We start in Padrón, in the atrium of the collegiate church of Iria Flavia, paved with epitaphs. The 28 bishops of Iria rest according to tradition on the ground. But in this cemetery of Adina we can also find the Nobel Camilo José Cela, who rests in the shade of an olive tree; and in other times lay the remains of Rosalia de Castro, who was buried here although years later they transferred their remains to Santiago de Compostela.

In Noia there is a cemetery with medieval tombs, which belongs to the Church of Santa María A Nova, which has become one of the most important in Europe. The history of Noia, the trades and the economy, is engraved in the stone of their graves.

But if instead of hundreds of tombstones, you prefer modern design cemeteries you will have to go to the Costa da Morte, where César Portela’s work is located. His cemetery in Fisterra is pure art. Fourteen granite cubes stranded on the coast, facing the ocean.

In Dumbría we find an explosion of colors. Neither epitaphs, nor angels, nor religious symbols, just a wide variety of colors.

One of the most visited cemeteries is found in another area of ​​the Costa da Morte. In Camariñas the Cemetery of the English is based, that keeps memory to the 172 British men who died in the wreck of the ship The Serpent. Only three sailors saved their lives. This small cemetery is part of the Route of Significant European Cemeteries.

In Cambados is located the most melancholic cemetery in the world, according to the words of Álvaro Cunqueiro. Here are the ruins of Santa Mariña de Dozo, of great beauty.

Here lie the wife and son of the writer and playwright Ramón María de Valle Inclán.