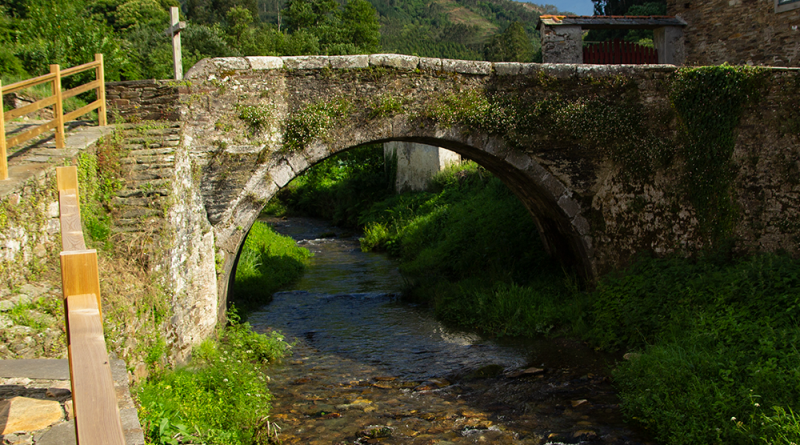 The rivers and paths of Galicia are full of ancient bridges that have survived to this day so that we can enjoy their beauty and their architectural and heritage value. But also to preserve an important immaterial value as reminders of stories, fables and rites. In this blog we would like to invite you to get to know some of these legendary bridges.

The name of this bridge of medieval construction and a single arch built over the Deza River and located in the vicinity of the monastery of San Lorenzo de Carboeiro is not accidental. Legend has it that it was the devil himself who built it after a deal with the monks, who were tired of seeing how the floods caused damage to the viaducts they had built earlier. The monks undertook to hand over the souls of the dead to the devil during a Sunday day, but when the day came, they prolonged the prayers throughout the day in order to avoid fulfilling the agreement.

Although today the name of the town of Pontedeume is clearly linked to the river that bathes its lands, the Eume, there is also room for legend here. In this case, the story that has survived to the present day speaks of how the monumental viaduct that links this municipality and Cabanas was built by the devil to capture the soul of a beautiful young woman who owned land on both banks and who had been trapped on the opposite side of her castle. As in the previous case, they also avoided the devil and from that episode only the name Ponte do Demo would remain, although it was reconverted over the centuries in Pontedeume.

The intervention of the devil is also present in the legend that gave its name to this pass over the Navia River located in the municipality of Becerreá in Lugo. The riverbed separated a couple of lovers who made a pact with the devil to give him a newborn baby if he built a bridge that would allow them to meet. The devil agreed and raised the viaduct, but the couple gave him some newborn cats so that they would not have to give him the child they were expecting. Hence the name of the place.

Formerly known as Ponte dos Ruzos, this viaduct located on the edge of the town of Mondoñedo owes its current name to a story in which history and legend are mixed and which links it directly to the tragic end of Mariscal Pardo de Cela. This famous nobleman was condemned to death by the Catholic Monarchs for confronting them, and although his wife, Isabel de Castro, managed to get him pardoned, she did not arrive in time to hand over the document and avoid execution. The delay took place precisely on that bridge. Legend has it that the Canons of Mondoñedo, the Marshal’s enemies, kept Isabel de Castro there long enough to prevent her from delivering the news of the pardon and having the sentence carried out.

Here again, history and legend come together to explain the name of this small viaduct located on the outskirts of Tui, on the old road to Compostela and the road where pilgrims on the Portuguese Way still travel today. The fevers that give it its name are those of the illness that forced San Telmo to interrupt his journey to Santiago and that would cause his death a few days later. The bridge would be the place where he felt the effects of the disease. Once there, he decided to cancel the pilgrimage and return to the city of which he was later named patron saint.

The figure of San Telmo is also linked to the medieval viaduct that links the municipalities of Nigrán and Baiona. In this case, legend has it that a great storm hit the place while the saint was preaching to the faithful. Those present tried to flee in fear, but the saint managed to open a clearing between the clouds and prevent the bridge from suffering the effects of the storm. This is not the only legend that has inspired this viaduct. The bridge was also, in times, the scene of fertility rites.

The bridge that joins the two halves of the Ponte Arnelas village separated by the River Umia is also a place related to ancient fertility practices. And it is these rites that have led to the viaduct being known as the Os Padriños Bridge (Godfathers Bridge). According to tradition, those women who had not been able to carry previous pregnancies to full term had to go to the bridge and ask the first man who crossed it if he could pour water from the River Umia onto her belly. Afterwards, a small party was celebrated on the spot and the dishes were thrown into the river. If the pregnancy ended positively, the stranger would became the newborn’s godfather.

Located in the middle of Fisterra Way, A Ponte Maceira viaduct is linked to a legend related to the Apostle Santiago. The story explains that a group of disciples who had escaped from the Roman captivity crossed the Tambre River through a viaduct, the As Pías´ Bridge, which collapsed when the legionaries who were trying to hunt them down were crossing it. Although there are several locations where this episode has been situated, the link between A Ponte Maceira and the Jacobean phenomenon has meant that this supposed relationship with the old As Pías´ Bridge has taken on a special intensity in this place.

It is said that on one of the stones of this bridge located over the river that gives it its name, it is possible to see the outline of a hand. According to the legend, it is the mark left by the “mouro” (a character from Galician mythology) who built the bridge on behalf of the neighbours. This “mouro” had finished the work leaving a stone badly placed so that the structure trembled with the aim of forcing the locals to pay him again for the repair. When he saw that the stratagem had taken effect he repeated it successfully several times. But when the neighbours realised what was happening, they decided to teach him a lesson by heating the badly placed stone with fire in such a way that when the “mouro” move it, his hand was burned and engraved there.

Two legendary stories already mentioned converge in this medieval bridge built over the River Tea. One of them tells us that it was built by the “mouros” and the other refers to the fertility rite according to which the woman who wanted to carry her pregnancy to term had to ask a stranger if he could pour water from the river onto her belly. As in other places, the legend here also includes a small feast, the pouring of the remains of the celebration into the river and for the stranger to become the child’s godfather. In addition, the origin of the name of the bridge also moves in this terrain halfway between history and legend. There are those who maintain that it is known as the bridge of As Partidas because it was the usual meeting place of a group of thieves to distribute their booty, but others defend that it owes that name to the fact that it served as a meeting place for a group of knights before they left for the fight.