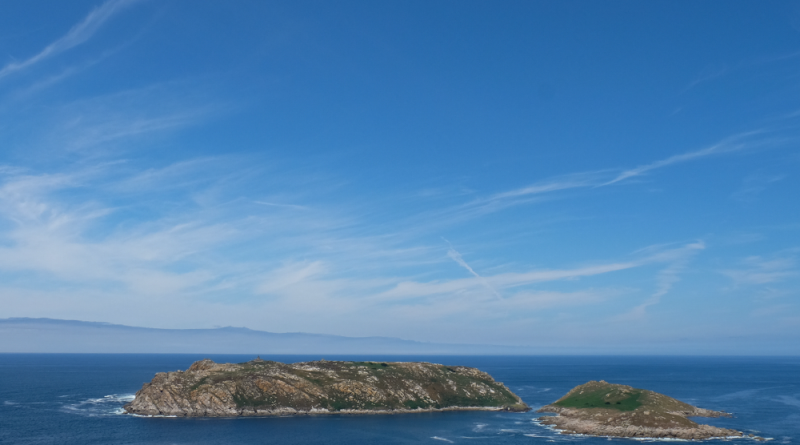 Galicia’s 1,500 kilometres of coastline give for much. On our coastline we can find breathtaking cliffs, majestic estuaries and beaches of unparalleled beauty. One of the wonders of the territory are its islands, as some of them, such as Ons, Cíes, Sálvora, Cortegada  —belonging to the Parque Nacional das Illas Atlánticas de Galicia— or A Illa de Arousa, are an important tourist attraction, receiving a large number of visitors every year. But they are not the only islands that dot the Galician coast. Below we invite you to visit other natural paradises surrounded by the sea which, despite not being so well known, are worth discovering up close.

Located at the bottom of the Vigo estuary, the Illa de San Simón forms a group with Illa de San Antón and two small islands, San Bartolomé and San Norberto. It has played various roles throughout history, being used as a monastery, prison during the Franco regime and even a lazaretto. Belonging to the municipality of Redondela, it is currently a cultural complex that has several facilities: the Stella Maris Residence, the House of the Crafts of the Sea, an aquarium, a museum, a library and even a multipurpose building. In 1999 it was declared an Asset of Cultural Interest and also forms part of the Natura 2000 Network as a protected European natural habitat. The island can be visited with authorization, and there are several companies that organize regular and arranged visits.

The Illas Sisargas are a small archipelago made up of three islands, called Sisarga Grande, Malante and Sisarga Chica (as well as some islets such as Chalreu and Xoceiro). Located in the Costa da Morte, in the municipality of Malpica de Bergantiños, these islands have been declared a Special Protection Area for Birds within the Costa da Morte-Natura 2000 Network SCI. Therefore, their rich fauna is notable for the presence of sea birds such as the shady gull or the yellow legged gull. The islands are mainly made up of rock walls and cliffs, although in the southern part of Sisarga Grande there is a small beach and a jetty. It also has a lighthouse where you can hear the sound of the sea and birds. There is no regular transport service to the main island, so the only way to get there is by boat from Malpica. In case you have the chance, we recommend that you do not hesitate to approach it.

This island located to the east of the O Grove peninsula was once a place of agricultural cultivation for the residents of the municipality. Its tourist interest emerged from the discovery in the 19th century of its thermal and medicinal waters, which led to it becoming a private property to exploit all its assets. At that time, the old spa was built which gave way to a spectacular increase in tourism and, in addition, to the construction of other services for which many visitors come today. Nowadays, A Toxa is an important thermal center of leisure and rest where many tourists look for relaxing days in one of its spas. In addition, it has several options to enjoy free time, such as relaxing on its beaches, taking a boat ride along the estuary or walking through its forest of centennial pines.

The Illa de Santa Cruz is perhaps not one of the largest or best known, but it hides a very special feature. Located in the estuary of A Coruña, in the bay of the town of Santa Cruz (Oleiros), on this small island is a historic castle that served to defend the estuary on numerous occasions. With a surface area of 1.9 hectares and a round shape, it is covered with trees and gardens and can be easily accessed from the ground via a wooden bridge. The Castle of Santa Cruz is, without a doubt, the symbolic monument of the town hall. At present, this fortress is dedicated to scientific research and dissemination as the headquarters of the University Extension and Environmental Dissemination Centre of Galicia. It hosts activities such as exhibitions and courses, and also has a library and a permanent collection. It is a place not to be missed and offers incredible views and very well preserved ecosystems.

The Illas Lobeiras are a small archipelago located in the province of A Coruña, in the middle of the Corcubión estuary. It is made up by Lobeira Grande and Lobeira Chica, two small islands that were the scenery of several shipwrecks throughout history, so the waters surrounding them hide many mysteries. These events prompted the construction of a lighthouse at the beginning of the last century. There is no unanimity about the origin of the name of the archipelago. There are those who defend that it is due to the fact that the islands were once inhabited by sea lions, but there are also those who think that they were named that way by sailors because of the danger they entailed. It is possible to visit them by renting a boat in the local ports.

The Illa de Tambo has only 28 hectares of surface, but it has a natural singularity worthy of note. Located in the estuary of Pontevedra, it reaches an altitude of 80 meters on Mount San Facundo and has a pyramidal shape covered with trees. It also has a long history, as in the past it was used by monks, lazarists and even the scene of looting by the famous corsair Francis Drake.

It was used for military purposes until 2002, although it belongs to the municipality of Poio. It remains under the surveillance of the Naval School of the Marín Navy and it is only possible to get close to it through organised visits. The Irmandade Illa de Tambo organizes excursions to Tambo for the places are limited so if you want to discover this natural wonder, hurry up because they will be over soon.

This small island that keeps the western end of the access to the Ribadeo estuary is known for its lighthouse, built a century and a half ago. Linked to the mainland by a narrow bridge, it is one of the points that every visitor who comes to this area of the Mariña in Lugo must contemplate and is included in several of the routes designed by the town council to show off all its attractions. The current lighthouse, which is cylindrical in shape, was built in the 1980s to replace the previous installation, which has now been converted into a hotel.