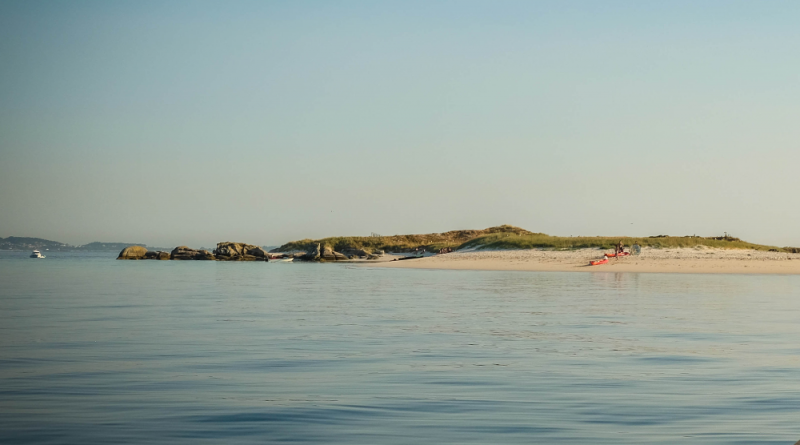 Xidoiro Areoso island, or simply Areoso, is one of the most precious natural treasures of Arousa. Located in the middle of the estuary and a short distance (just over a kilometer west) from the municipality of A Illa de Arousa, to which it belongs, it emerges from the waters like a paradisiacal dune of great natural value and that hides much more than it might seem to those who contemplate it from the mainland.

Its fame has increased over the years and thanks to the support provided by social networks and the Internet, its white sands and crystal clear waters have begun to attract an increasing number of visitors. The images of this natural paradise abound on the web and encourage word of mouth among the people of the area, which has ended up turning the place also into a source of business for some local entrepreneurs who offer sailings, taxi-yachts or canoe up there.

Areoso is an islet of almost 9 hectares formed practically by sand and whose highest point rises just 9 meters above sea level. The northern half is occupied by an active dune, while in the south granitic outcrops are mixed with a dune vegetated with herbaceous plants. In fact, on this beautiful islet, some archaeological sites have also been discovered, such as dolmens and megalithic burial mounds raised several thousand years ago. Its presence and the appearance of human and animal remains, in addition to ceramic pieces, have led experts to conclude that the place was inhabited in the past and to place this settlement at the beginning of the Bronze Age. Since then, it has continued to receive visits from both shellfishmen and those who used the granite from the site for quarrying.

Due to its mostly dune formation, the islet has undergone an important alteration process in recent years. On the beaches, in the period between 2008 and 2014 almost a meter of sand has disappeared and in the north dune its height and extension has been reduced. These changes have brought to light several megalithic structures and abundant archaeological material and it is not ruled out that with the passage of time and the action of winter storms, more vestiges of its ancient inhabitants continue to appear.

Effects of the boats of those who wish to visit this small oasis have also been added to the erosive action of the sea and the wind. That is why docking is prohibited there and the buoys protect the perimeter of the place.

This has meant that in recent years groups and local authorities have claimed that Areoso be endowed with a special protection status to prevent the effects of climate change and the increasing arrival of visitors attracted by its fame from ending up damaging this privileged place. Its future depends on everyone.