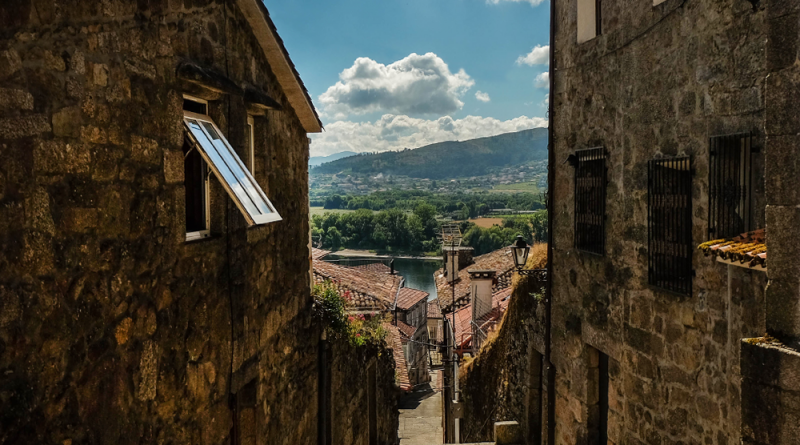 Considered the oldest city in Galicia as it has been inhabited uninterruptedly for two millennia and kept the same name throughout that time, Tui oozes charm and history in equal parts and remains a must see for all those who come to Galicia. From its privileged position on the banks of the river Miño and with the lands of Portugal within easy reach Tui boasts a beautiful historical centre where the traces of time are visible.

The fact that it was one of the seven capitals of Galicia, its importance as a border crossing or its role in the Jacobean phenomenon as one of the main entry points into Galicia for pilgrims on the Portuguese Way are some of the attractions of a town that also has another important legacy: the presence there of an important Jewish and Judaeo-convert  community.

The weight of the port and commercial activity of Tui was what led to a growing number of Jewish people beginning to settle in the upper part of the city from the 12th century and to develop an important and visible social and economic activity until, in the times of the Catholic Kings, its members were forced to leave the country or convert to Catholicism. The mark of those first centuries of peaceful coexistence, but also of the turbulent period that followed, make up a legacy that Tui wanted to recover and enhance by joining the Network of Spanish Jewish Quarters and designing a route that follows in the footsteps of those merchants, goldsmiths, scribes, doctors, apothecaries and representatives of other different trades that contributed to the growth of Tui. Below we show you some of the main places of interest on this route.

The Puerta da Torre, built in the 15th century, and the Puerta da Pía, the most important in the city, are also closely related to the Jewish community that inhabited Tui. The second owes its name, precisely, to the Jewish baptismal font that was found in its surroundings.

The times of peaceful cooperation between Jews and Catholics are visible in the Gothic cloister of Tui Cathedral. There, a seven-branched candelabra (menorah) is engraved in stone as testimony to the financial contribution made by the Jewish community to the construction of the temple.

Operating until 1492 and then used for various purposes, the synagogue of Tui was a crucial place for the Jewish population, as it served as a place of worship and meeting.

Tower of the Jew

The name of this stretch of the rampart built in the second half of the 12th century testifies that Jewish families also inhabited this area of the city at that time. Centuries later, the tower was incorporated into the house of one of Tui’s most important noble families.

The mark of the repression suffered by the population of Jewish origin from 1492 onwards can also be seen in spaces such as this prison, built in 1611 and used exclusively to imprison the canons of that origin.

The other great symbol of the harassment to which the Jews were subjected is kept in the Diocesan Museum of Tui and is also unique in Spain and Europe.The “sambenitos” were canvases that showed the names and sentences of the people tried by the Inquisition and were publicly displayed on the walls of the cathedral until the people affected paid a tax.