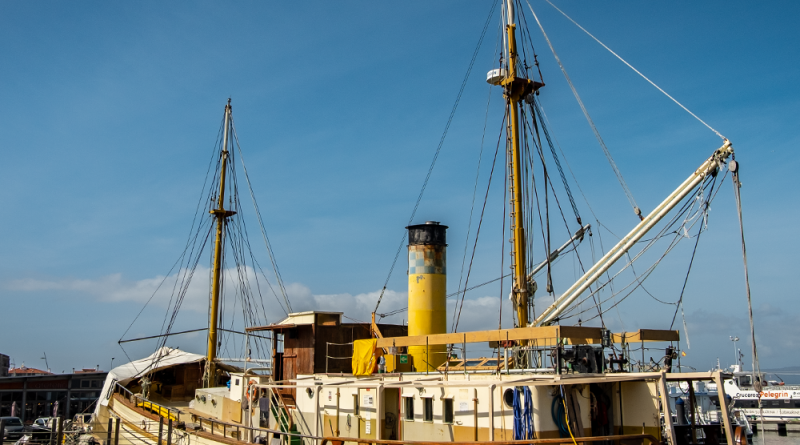 The sea and Galicia go hand in hand. One of the peculiarities of this land is its coastal relief, so the maritime world has always been present in the lives of many neighbors. There are many boats with history that, over time, have managed to become museums that have been opened to the public for cultural, historical or tourist purposes. Below, we show you a series of museum boats that you must visit if you wish to learn about an important part of Galicia’s history.

One of the most outstanding museum ships in Galicia is the Reina del Carmen, located in Burela. The history of its conversion into a museum goes back to the year 2000, when the town council decided to buy an old Bonitero boat to convert it into a space of tourist interest and recovery of maritime culture. This ship, which stands out for its wooden hull, is in the most important port in Spain in terms of marketing tuna.

A feature that attracts many tourists is that it is allowed to visit all its compartments, both outside and inside: the wheelhouse, the cabins, the kitchen, the engine room, the hold… Furthermore, visitors may learn first-hand how the boat works and become familiar with the fishing techniques and the history of the town.

The entrance fee to this museum ship, recognized by the European Union with the award of the Blue Flag, is 5 euros for adults. For children and young people between 8 and 18 years of age the visit costs 3 euros, while for those under 8 it is free, as well as for charter schools. In the case of groups of more than 20 adults, access costs 4 euros. It should be noted that this boat-museum can be visited every month of the year, although the timetable varies according to the season:

From June to September

From October to May

The Joaquín Vieta is a two-masted sailing boat, built between 1915 and 1916. From the moment of her launching, she has been linked to the estuary of Muros and Noia, but she has travelled along the Galician coast for many years. In 2004, when it seemed that its destiny was to be turned into firewood, a popular initiative was launched to rescue it. In 2010 his rehabilitation was completed and he was converted into a floating museum. Today, it is fully equipped to sail with groups.

Despite the fact that the restoration process has respected the traditional building systems, the greatest transformation with respect to the original design is the new chamber that, due to its spaciousness, allows the performance of various activities. Located in the Port of Freixo, which belongs to the municipality of Outes, the Joaquín Vieta offers excursions so that visitors can enjoy an unforgettable half-day or full-time voyage.

The museum of the ship’s own history takes us to know the oldest sailing ship in Galicia and all its peculiarities. If you visit it you will be able to know first hand a great part of the seafaring history of the 20th century, since its crew is the one that transmits the culture of the sea that they themselves were protagonists. They offer didactic activities for schoolchildren and programmes of maritime culture, as well as associations and congresses, always with budgets as you can consult through their e-mail: info@joaquinvieta.com.

The Hidria Segundo is the only steamer that has survived to this day in Spain. It was built between 1963 and 1966 in Vigo and was used by the Aljibes de Vigo company to supply spring water to merchant ships, ocean liners and fishing boats in the Vigo estuary. After the bankruptcy of the company in 1994 and the subsequent abandonment of the ship, the Hidria Segundo was acquired by the company Vapores del Atlántico from O Grove. Thus, it was completely restored until it became a museum ship, as well as serving as a congress hall and passenger ship.

Located in the port of O Grove, this ship stands out for its design and operation, as well as for its history full of ups and downs. Having been transformed into an interesting maritime museum, it is open to visits and attracts many tourists who come to the area. In addition, it is rented out privately to carry out crossings through the Galician estuaries with its four crew members, thus promoting nautical tourism.

Baiona is a municipality where history is present. Its port was the first in Europe to hear the news of Columbus’ arrival in America since on March 1, 1493, the Pinta caravel (one of the three that made up Columbus’ expedition) docked in its waters. On the occasion of the commemoration of the fifth centenary of that voyage, a replica of the ship was built so that visitors could enter it.

In 1999, the interior of the ship was reconditioned, providing it with the elements that characterized Columbus’ time. In this way, visitors can see the caravel in the same way that the original one arrived at the port of Bayonne. It also contains panels and games for the user to interact with the environment, in addition to contemplating the figures of the crew and the American Indians.

Located on the jetty of Paseo Alfonso IX, this replica of the Pinta caravel offers an unparalleled experience. The capacity of the visit is 12 people and the price of the ticket is 2 euros. For more information and group reservations, please call 986 35 66 88 or send an email to the following address: museo.navegacion@baiona.org.

In the summer of 2019, A Guarda witnessed the XIV Encontro de Embarcacións Tradicionais de Galicia, one of the most important manifestations of maritime culture. In that event, the Piueiro Association had the objective of presenting one of the most representative boats of the municipality: O Volanteiro.

The neighbors had understood its construction as a common objective, so a financing system was created based on the sponsorship of the pieces that constitute the boat. All the aid received was indispensable, reflecting the common commitment of a municipality that has always been committed to culture. Everyone’s generosity was fundamental in achieving the challenge.

You can visit O Volanteiro for free on Tuesdays and Thursdays from 14 July to 27 August, so this summer is the perfect occasion to do so. These guided tours, which last one hour, will take place at 20:00 hours, having as a meeting point the stairs of the port. It will be necessary to wear a mask and request a reservation in advance at the Tourist Office of A Guarda. For more information, call 986 61 45 46 or send an e-mail to aguarda.oficina.turismo@gmail.com.