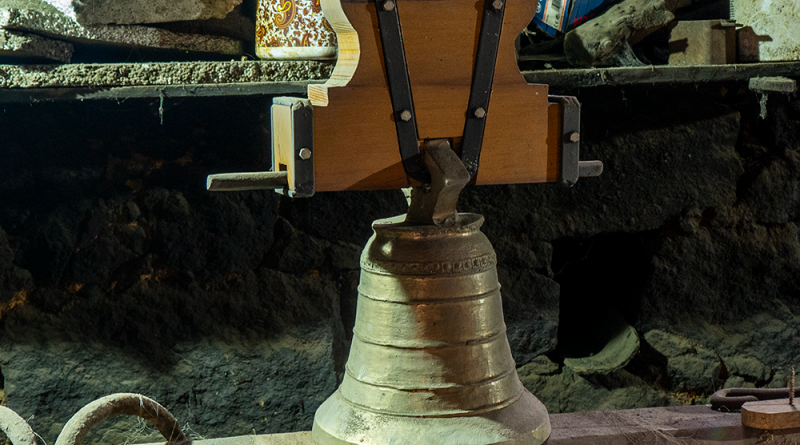 Have you ever stopped to think how church bells are made? Where are they made? Who prepares them?

Well, you don’t have to go far to discover it. In Caldas de Reis there is a bell and fine metal casting workshop run by the Ocampo family.

But it is not now. This workshop of sound pieces has been in the parish of Arcos da Condesa for 400 years.

In 1630 Felipe Blanco Paz established his work zone there. Until then he made the bells in the place where the order was made. It was usual to work on the ground, where several artisans gathered, assembled a furnace and melted bells for all neighboring parishes. And so again and again, moving throughout Galicia as if it were nomads.

Felipe Blanco decided to change that way of working and settle in a stable place. Since then, different generations that were involved in the business y they have changed workshops twice, but always staying in the parish of Arcos da Condesa. The current one, we find it in Badoucos.

José Enrique López Blanco, Chicho is now in charge. He grew up in mud and bronze, smelling of burnt earth, and little by little he was entering the business. When he was 20 years old he helped his father and now, with him retired, he has taken over.

He is the last bell maker of Galicia, but he refuses to abandon his traditional way of building this peculiar instrument. And it is not simple. An order can take about 3 months.

The first thing to do is prepare three clay molds, one above the other, superimposed, without sticking. Once dry, the middle one is broken and thrown away, joining the outside and the inside again, leaving a space where the bronze will be cast. These pieces of mud are buried, as in the old way, to get more resistance when the time comes to pour the alloy.

But it does not serve any material for the process. Tin and copper are the components with which they work to make bronze, with very well measured proportions so that everything goes perfectly. At that time, very high temperatures can be reached in the workshop because the liquid obtained by melting the metal with the wood burning with full force reaches 1,200 degrees.

From that, the thickness of the bell in each zone and the subsequent cooling process, will depend on the instrument emitting some sounds or others. There is the secret.

They know it in the Cathedral of La Almudena, where the Ocampo have left their mark making the jewels that hang from their bell tower, but we also know it here in Galicia, where they have made bells such as Bastavales or those of the Cathedral of Santiago de Compostela. In the latter case, preparing some replicas of those that were previously.

Now it is Chicho’s daughter who plays with the land in the workshop while he tries to keep this tradition of a bell ringer alive. For another 400 years?