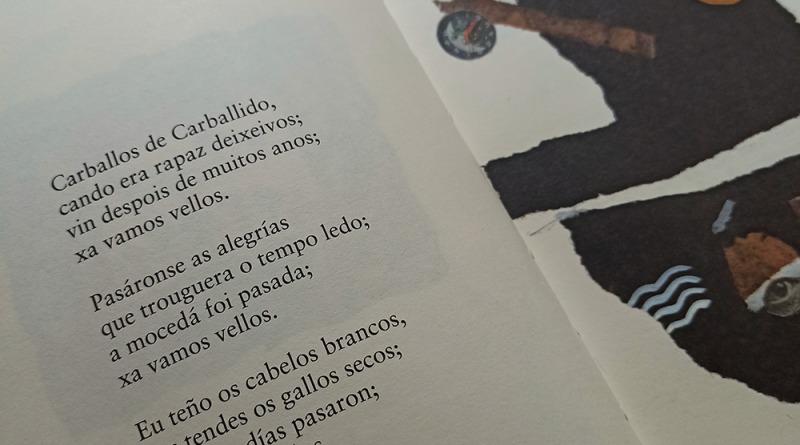 Galicia, in its widest meaning and from the most varied perspectives and fields, is the main source of inspiration for the authors who since more than half a century have been honored with the Galician Letters Day. All of them have contributed to the dissemination of the culture and language of this land through essays, novels, poetry books and other diverse texts. In many cases, moreover, these works have become windows through which to look out over Galicia, in texts with which to be guided through our landscapes and monuments. Here you habe just a small sample of the “guides” that some of our most illustrious authors have given us.

This work by Rosalía de Castro is one of the founding texts of the galician literary renaissance and constitutes a complete declaration of love for Galicia. Among its verses its landscapes, its inhabitants, its customs and the traditional way of life are reflected. Some of his poems allow us to get closer to specific places and moments, such as the celebration of the pilgrimage of Nosa Señora da Barca, in Muxía. The importance of “Galician songs” is so great that the election of May 17th as the Galician Letters Day is precisely because it was that day in 1863 when the first copy of the work was published.

“This book appears inspired by the ambitious desire to be the friend and comrade of the traveler who arrives in Galicia with an open spirit to natural and artistic beauties, to present and past realities.” This is how Otero Pedrayo describes his “Galicia Guide” in the prologue of this work, which includes itineraries to tour this land stopping at its places of greatest interest. First published almost a century ago and in spanish, the work maintains its interest by the erudition of the author and the validity of many of its contents.

The search for cultural links between Galicia and other Celtic peoples led Castelao to undertake a study of the crosses and other similar constructions that would last for much of his life. “The stone crosses in Galiza”, a work published posthumously in 1950, continued the work that Castelao had dedicated to the crosses of French Brittany and to previous works, such as the speech prepared on the occasion of his entry into the Royal Galician Academy. The descriptions of crosses, souls boxes and calvaries and the dozens of illustrations that accompany them make this book an indispensable reference manual for lovers of popular art.

The pines that give title to this book of poems and its most famous verses (those that form the Galician Hymn) are one of the many elements of his native Ponteceso visible in this work by Eduardo Pondal. The Camelle coast, the landscape of Monte Branco, the oak grove of Verdes, the Dombate dolmen and the course of the Anllóns river also populate these pages devoted to the lands of the Bergantiños region and its surroundings.

“A cociña galega” (The Galician cuisine)

Álvaro Cunqueiro was a prolific author with an overflowing imagination and was also passionate about good eating, as he reflected in several of his works. In “A cociña galega” he makes a detailed review of the main ingredients and dishes of the gastronomy of this land, touring all of Galicia in search of traditional rites, such as pig slaughter, and seasoning its pages with innumerable anecdotes.

Although it is a work of fiction, “A Esmorga” is also an open door to the city of Ourense, in whose streets the main events of the revelry of its three protagonists take place. The Burgas, the San Cosme Fount, the Corregidor Square, the Alameda and other places of the city, renamed Auria in the novel, appear on its pages, which has led the city council to design a route today tourist following in the footsteps of the characters from Blanco Amor.

The publication that the poet, journalist and lexicographer Eladio Rodríguez wrote for the Galician Hotel and Innkeepers Association dates back to 1917. The volume includes descriptions and recommendations of the main cities and towns in Galicia and, as the Otero Pedrayo’s guide, it allows us to see how much all these places have changed.

Folgoso do Courel, his native municipality, was the setting that inspired many of the verses of this great poet, but his poems were captivated by many other landscapes throughout Galicia. This volume collects those verses linked to each other because they were inspired by emblematic places of the different routes of the Camino de Santiago such as O Cebreiro, Compostela or Fisterra.

The dissemination of Galician heritage occupied a large part of the literary production of who, among many other positions, he held the direction of the Museum of Pontevedra for almost half a century. One of his first publications in this field was this Compostela guide, published in the early 1930s, which allows us to see what the city was like almost a century ago.

As its own name indicates the native region of Manuel María is the central theme of this collection of poems. The landscapes around the Miño river, monuments such as the Torre de Vilalba or the Pazo de Sistallo and the evocation of traditional pilgrimages such as that of the Virgen de la Saleta, in San Xiao de Mos (Castro de Rei) nourish this collection of poems. They were published for the first time in 1954 and have also inspired a route through the area that has as its starting point the author’s house museum, located in Outeiro de Rei.

Carlos Casares’ admiration by Ernest Hemingway, a writer who was linked to him by narrative and stylistic ties, was translated into this work. Casares traced through Hemingway’s letters and texts the steps through this land gave by the author of titles such as “The old man and the sea”, a work that Casares translated into Galician. Santiago de Compostela, A Coruña, Ourense, Vigo and Noiaare some of the places that Hemingway recommends to visit to friends and colleagues.

The ethnography, geography and history of Galicia in general and of those places through which he passed at different stages of his life in particular were the main areas of literary creation and dissemination of Antón Fraguas. To the city of Lugo, where he lived in the 1950s, he dedicated one of his most important works, a monograph in which he combined a review of the history of the city with a description of its most important monuments and celebrations.

The texts of Ramón Piñeiro, a key figure in “galeguismo” and the dissemination of Galician culture, are combined in this volume with the photographs of Víctor Vaqueiro to invite the reader to a tour of a land that the author defines as “a country of humid Europe, an Atlantic crossroads between the north and south of the continent ”.