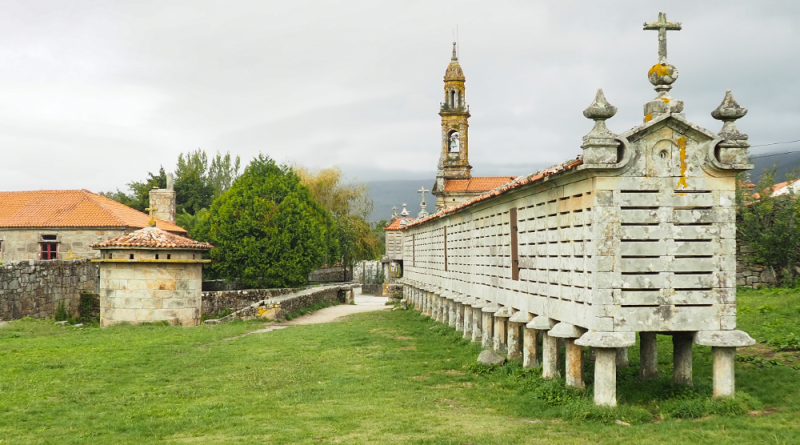 Hórreo, cabaceiro, cabaz, cabazo, cabaceiro, calostra, calustra, canastro, caustra, piorno… There are many names under which these traditional constructions are known, but they are not too many if we take into account that according to some calculations there are about 30,000 examples throughout Galicia. In the absence of an official count, this is the commonly accepted figure based on the estimate that there is an average of one hórreo per square kilometre in the community. They are thus one of the main identifying elements of our landscape and make the community the great exponent of a phenomenon present in other areas of the north of the Peninsula and Portugal, as well as in areas as disparate as the Balkans, Scandinavia or Japan.

The origin of its most frequent denomination is in the Latin term “horreum”, which would mean grain store or granary. This, as simple as it is necessary, is what a hórreo consists of, but although it was the Romans who gave them the name by which they are known today, their presence in Galicia is older since the previous inhabitants of these lands would have also used them. They are constructions erected to store food (mainly cereals) and have been designed in such a way that their contents are isolated from the humidity of the soil and out of the reach of animals and rodents. In fact, one of the most frequent elements of their design bears the revealing name of tornarratos (something like “avoids mice”) and consists of a flat stone that is placed between the columns that support its main structure to prevent the passage of these small rodents. Beyond the different typologies that can be distinguished, there are elements common to all the hórreos, such as the fact that they are raised from the ground and have slots to allow ventilation.

Their presence extends all over Galicia and their variety of denominations has to do with the different geographical areas and with the differences of design and construction. Thus, for example, the terms cabaz, cabazo and cabaceira are usually used to refer to the circular hórreos whose walls have been made of wicker rods. But the most widespread hórreos in Galicia are characterised by a rectangular floor plan that is raised from the ground by stone columns (feet) and covered by a gable roof. These hórreos constitute an immense majority compared to the square and circular constructions and to the anecdotal cases in the form of L. The walls can be of stone, wood, plant elements or a combination of several of these materials, and in the roofs predominates the tile, although there are also areas in which slate is used and others in which the material used is straw.

In many villages it is common to find a hórreo next to each house, but in some places they are grouped in a common space. Also the monasteries and other constructions related to the church made use of the hórreos, in fact those of greater size were linked to these institutions, as well as to stately constructions like pazos. Their people in charge thus made ostentation of their importance at the same time as they gave accommodation to the result of their incomes and tributes.

To visit Galicia and not to contemplate some hórreo is almost impossible task, since some constructions serve at the present time as ornamental elements in outstanding places of villas and cities. But if you want to know some of the most singular ones, here you have a small guide to go through the community from hórreo to hórreo.

The more than 30 buildings that can be seen together in the municipality of A Merca (Ourense) make this set of hórreos the most important in Spain and the second in Europe. They were placed in a sloping area of the Camiño da Feira a couple of decades ago to allow the improvement of public spaces in the area. All of them, except for two of mixed construction, are made of wood.

It does not reach the length of those of Araño, Lira or Carnota, but this hórreo located next to the monastery of San Xoán boasts of being the largest in the world because the combination of its greater width than usual (around 3.3 metres) and its 33 metres long. It is supported by 51 feet.

Without leaving the municipality of Poio, but in this case in the fishing village of Combarro, there is another of the most beautiful group of hórreos in Galicia. The fact that they are located in a complex of great beauty due to its traditional architecture and its location on the front line of the coast makes the hórreos of Combarro one of the most photographed places by those who visit the Rías Baixas.

Another of the most beautiful sets of hórreos that can be seen in Galicia is in the parish of Quins, in the municipality of Melon (Ourense). On a small hill located in the centre of the village you can see about twenty constructions next to a via crucis. Furthermore, just a few hundred metres away, in a place known as A Eira do Casal, located in the same parish, there is another group of hórreos.

Its ornamental details and the beautiful setting it forms with the nearby dovecote have meant that, although it is not the longest in Galicia, the Carnota hórreo can be considered the most famous in the community. Originally built in 1768, 15 years later it was extended with eleven more pairs of feet to reach the 34.76 metres it has today.

It was built between 1779 and 1814 and, like the neighbouring hórreo of Carnota, the one of Lira has a total of 22 pairs of feet, although in this case the length is slightly longer, as it is over 36.5 metres. It is thus situated on the second step of the podium of the longest hórreos in Galicia.

Built in the 17th century and catalogued as an Asset of Cultural Interest, this hórreo located in the parish Araño (Rianxo) is considered to be the longest not only in Galicia, but in the whole planet, thanks to its 37 metres in length. It also stands out for having been built entirely of stone and lacking the feet that usually support these structures.

The village of O Piornedo allows us to enjoy the landscapes of the mountains of Os Ancares and to see the features of the traditional architecture of the area, whose main exponent are the pallozas, circular houses provided with a conical vegetal cover. This way of roofing them is also present in their singular hórreos, whose square floor plan also differentiates them from the predominant model in most of Galicia.

In the region of Bergantiños you can find several hórreos whose main floor is built on a stone structure (one or two heights) that also serves as a warehouse or as a place to keep the animals of the house. One of the most spectacular, and probably the highest in Galicia, is the one located in the parish of Cores, which rises more than eight and a half metres above the ground. The doors and windows on its lower floors make it more like a home than a conventional hórreo.