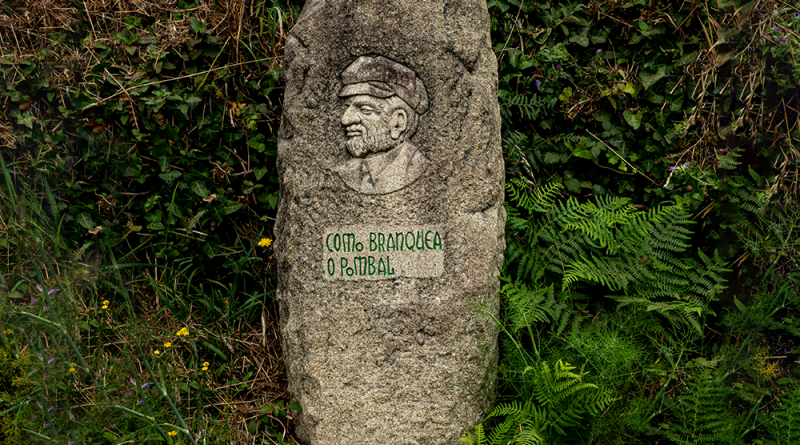 culture
8 February, 2021 Turismo de Galicia 0 Comments Along the coast of Malpica, Astonishment at Dombate, Brandomil and the dolmen of A Piosa, Eduardo Pondal, journey, Sighs of love in the Penedos de Pasarela, The landscapes of childhood, Travelling through Coristanco

These two verses in which Eduardo Pondal refers to his native town are just a small example of the importance that the lands where he was born on 8 February 1835 have in the work of the illustrious author whose rhymes also gave voice to the Galician anthem. His native municipality and the landscapes and monuments of the region and other nearby towns are a source of inspiration and a backdrop for his aesthetic and historical concerns. It is no coincidence, therefore, that Pondal is known as the Bard of Bergantiños. His work becomes a guide to discover some of the most important places in the area. Would you like to discover these places and enjoy some of Pondal’s verses as they were originally published?

The landscapes of childhood

The importance of Ponteceso’s landscapes in Pondal’s work is well known in his native town, where they have designed and signposted with monoliths a route through some of the places that appear in the poems of the illustrious writer. Starting at a small “Ponte-Ceso”, where the house in which he was born still stands, the route takes us to clearly recognisable places such as the village of O Couto, where he was baptised and where today the foundation that bears his name is located, and the top of “Monte Branco”, from where one of the best views of the mouth of the river “Anllóns” can be seen. Other nearby landscapes, such as the “castro” of Nemeño (“Nemenzo” in Pondal’s verses), the tongue of sand that surrounds the river before reaching the sea (the “Barra” of the Anllóns) and the marshes (“Agra de Mares”) are also part of this route. Furthermore, in his poems there are references to other nearby places such as the church of San Fins of Anllóns, whose “bells” are the common thread of one of his best-known compositions.

The green meadows of Bergantiños, the fields full of wheat and its pine groves can be seen in the verses of another poem by Queixumes dos Pinos, in which Pondal makes a detailed tour of the municipality of Coristanco. “Ou terra de Bergantiños” is the beginning of a poem full of references to emblematic monuments such as the bridge of A Ponte-Dona (a viaduct that links Coristanco and Ponteceso and which has remained almost unaltered since the time of the Bardo) and the Torre de Traba (a stately building whose silhouette has been immortalised in the municipal coat of arms of Coristanco), samples of the local archaeological heritage, such as the castro of Oca (yet to be excavated, but whose profile is clearly visible under its vegetation cover) or the leafy landscapes of Verdes (nowadays converted into a prized leisure area).

“Aquel’ he a torre de Traba,

Sighs of love in the Penedos de Pasarela

Only three lines make up the poem in which Eduardo Pondal mentions the spectacular rocky masses of capricious shapes that can be seen in the steep mountains located on the border of the municipalities of Laxe and Vimianzo. But these three lines are enough to confirm that these majestic natural formations that today constitute a protected landscape already aroused the fascination of those who contemplated them in Pondal’s time.

The dolmen of Dombate, one of the most important megalithic monuments in Bergantiños and in Galicia as a whole, received special attention from Pondal, who dedicated a poem to it, initially published in the “Revista Gallega” (1895) and later included in “Queixumes dos Pinos” from its second edition onwards. In these verses, Pondal recalls his school trips from Ponteceso to Nemiña (Muxía), where he was a pupil of a clergyman, and he makes clear his amazement at the contemplation of the dolmen, nowadays sheltered under a building erected to ensure its preservation. Even so, the sensation experienced by those who currently visit this monument, considered the cathedral of Galician megalithism, must not be very different from the one experienced by Pondal when he contemplated the enormous stones of this mysterious legacy from other ages.

Another of the dolmens to which Pondal gave some of his verses is that of A Piosa, in Zas. Here the poet locates the tomb of Brandomil, a mythical Celtic warrior who died fighting the Romans. Although the dolmen was erected a couple of millennia before this hypothetical confrontation, Pondal even describes Brandomil’s grave goods.

Along the coast of Malpica

The landscapes of another Bergantiñan municipality, Malpica, also deserved the attention of Pondal, who focused on two of its most emblematic spaces. This is the case of the archipelago of the Sisargas Islands, which Pondal refers to as the destination of birds whose freedom he envies. In two other poems in “Queixumes dos pinos” he speaks of Punta Nariga, a cape now crowned by one of the most modern lighthouses in Spain (the work of the architect César Pontela).